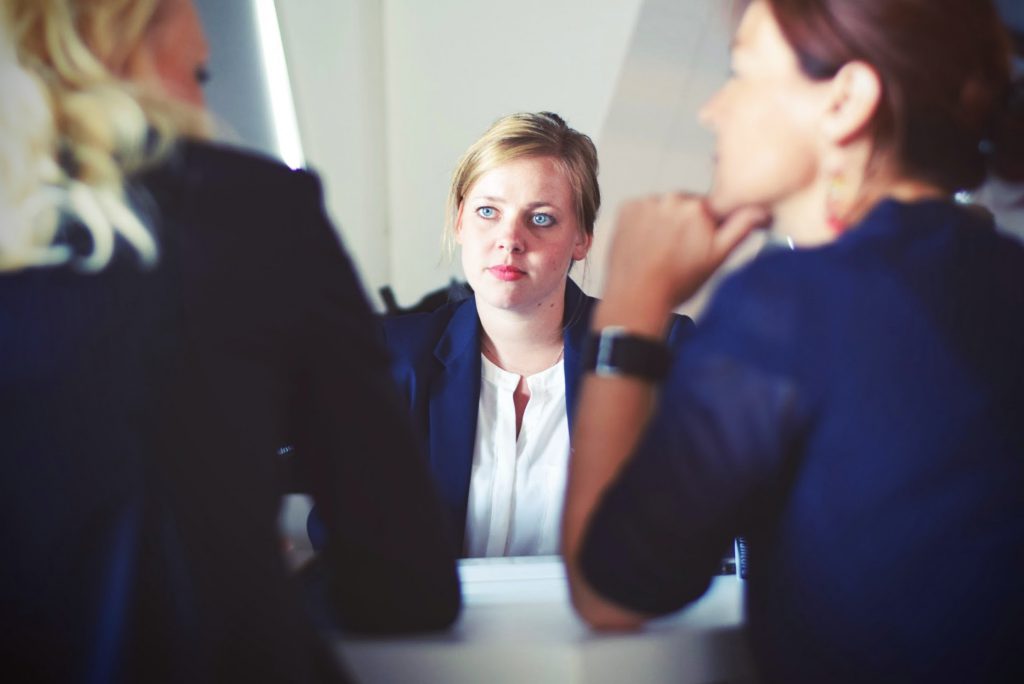 Does your heart sink at the thought of a job interview in German? Well don’t worry … that’s normal.

It’s like writing with your left hand, or drinking coffee from the other side of the cup.

But not impossible. A few key phrases can help you sound like a Profi and help you get that dream job. (A Profi is a professional. And that’s what we are, right?)

But first here are words to avoid, because they’re over-used and altmodisch (old-fashioned).

I’ll prove it. Watch the video. Can you hear the words?

Instead here are three real phrases that people really use in interviews, and they respond to three real questions you might be asked.

1. Tell us about yourself. Erzählen Sie uns etwas über sich.

2. Why do you want to work here? Warum wollen Sie in unserer Firma arbeiten?

3. What skills can you bring to our company? Welche Fähigkeiten bringen Sie mit?

So there’s three phrases to help you! If you find them useful please share the blog with others.

Smashing the German Job Interview! – our free event – will give you more useful phrases. It’s on Saturday 26 Jan from 1 to 2pm at All on Board school, Seestraße 27 in Wedding.

You can socialise, meet others, do some networking and learn to SMASH that German job interview and get that dream job.

But remember. Sign up by 22nd January to be sure of a place.

Well. Whatever brought you here I hope you’re finding your feet, your Berlin and getting settled.

I’m sure you know how to get around by now. Moving by U-Bahn, tram, by bike or on foot, the city is a metropolis of movement.

I didn’t know people came here for that.

More than other cities, Berlin is easy to get around.

So here’s your first tip.

1. Wie sagt man ‘movement’? Bewegung is movement. It can be physical movement or an organisation or association. (Like the scout movement Pfadfinderbewegung.)

Which Berlin is famous for!

Now you’re wondering what I’m doing here. Well I’ll be giving you essential tips on surviving and thriving in Berlin.

Stuff like smashing a job interview, finding a tandem partner, and finding a school to help you learn German.

On that note … I’d like to invite you to our free Smashing the German Job interview! event on Saturday, January 26, 2019, at All on Board school, Seestraße 27 in Wedding!

You’ll meet the staff, learn some useful vocabulary, and do some fun activities.

You’ll be greeted at the door and we’ll explain how to improve your German in a nice environment—with us!

All on Board – Smashing the German Job Interview! – Jan 26 2019 #learngerman #berlin

But back to movement. If you’re relatively new here I bet you’ve moved house, with all those boxes, getting lost, and walking up to those Altbauwohnungen.

So here’s your second and third tip.

We had to move house when I got a new job. Als ich eine neue Stelle bekam, mussten wir umziehen.

Entschuldige, ich muss mich umziehen = Excuse me, I must get changed.***

3. How do you say ‘to be moved’ by something in German? Remember that word Bewegung? That was the noun. We use the verb in a similar way to English.

I was moved by the film = Der Film hat mich bewegt

So that’s your three ways to talk about movement in German. Oh I forgot—what about the half?

Well, if you’re like me, then one consequence of moving is the arguments that sometimes erupt …

So I don’t wish an argument on you—but here are the essential words in German, just in case!

3½. Wie sagt man ‘to have an argument’?  Einen Streit haben

You never argue … really? Not even at IKEA?

Well that’s all. I’ve given you some essential phrases to talk about movement and moving house.

Check out our website. And keep your diary free for Saturday, January 26, 2019 – Smashing the German Job interview!